Phil and his wife, Connie raised their three sons on a small horse farm in Newell, NC. In 1991, when friends introduced them to Leatherwood, they immediately became a part of the community. They became full-time residents in 1998 and have never looked back! Phil’s time is divided between his career of law and real estate, and his hobbies of woodworking and horse training (he often conducts “horse whisper” clinics at Leatherwood). In 2004, Phil was delighted to accept Phil Rash’s offer to join him as co-owner of Leatherwood outside the gate. He believes the blend of mountain beauty, wonderful people, and pretty horses make Leatherwood Mountains the ultimate place to be! In the Summer of 2017 Phil sold his portion of the business to his Son, Trevor.  Phil is confident that the future of Leatheorwod is bright and in capable hands with Whitson & Hanchey at the helm! 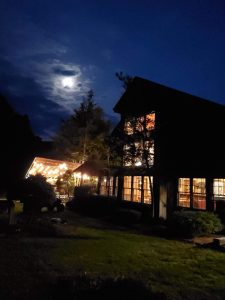 Join us at Saddlebrook Restaurant for an evening of live music entertainment from talented, local High Country artists, 6:00-8:00 PM. We look forward to seeing you there!
View Calendar

Off Canvas: off canvas